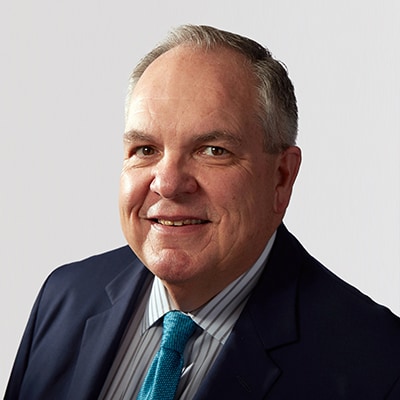 Ron is chairman and chief executive officer of State Street.

Prior to State Street, Ron was president of Asset Management & Corporate Services for Fidelity Investments, responsible for all Fidelity asset management organizations and Fidelity’s corporate functions and enterprise technology. He served at Fidelity from 2010 to 2014.

Prior to Mellon, Ron was with McKinsey & Company from 1986 to 1997, and was elected as partner in 1992. He founded the Investment Management practice and was co-founder of the firm's North American Personal Financial Services practice. Additionally, he was a member of the Property & Casualty Insurance practice. During his tenure with McKinsey, Ron served in the firm’s Boston, New York and Stockholm offices.

Ron serves on the boards of Unum Corp., Beth Israel Lahey Health, ABL Space Systems, The Boston Foundation, The Ireland Funds, IYRS School of Technology and Trades, Syracuse University, and WBUR. He chairs the board of directors of the Greater Boston Chamber of Commerce and also serves on the Federal Reserve’s Federal Advisory Council.

Ron is involved in investment industry efforts around climate, corporate governance, and diversity and inclusion. He leads the Sustainable Markets Initiative Task Force for Asset Managers and Asset Owners. He also has leadership roles at the International Business Council, Institute for International Finance, Focusing Capital on the Long Term, the Council for Inclusive Capitalism, and the Vatican Summit on the Just Transition with Notre Dame University.

Ron received his Bachelor of Arts degree in political science from Syracuse University in 1980 and his Master of Business Administration from Harvard Business School in 1986.

Ron is a frequent speaker and writer, and an avid offshore sailboat racer.